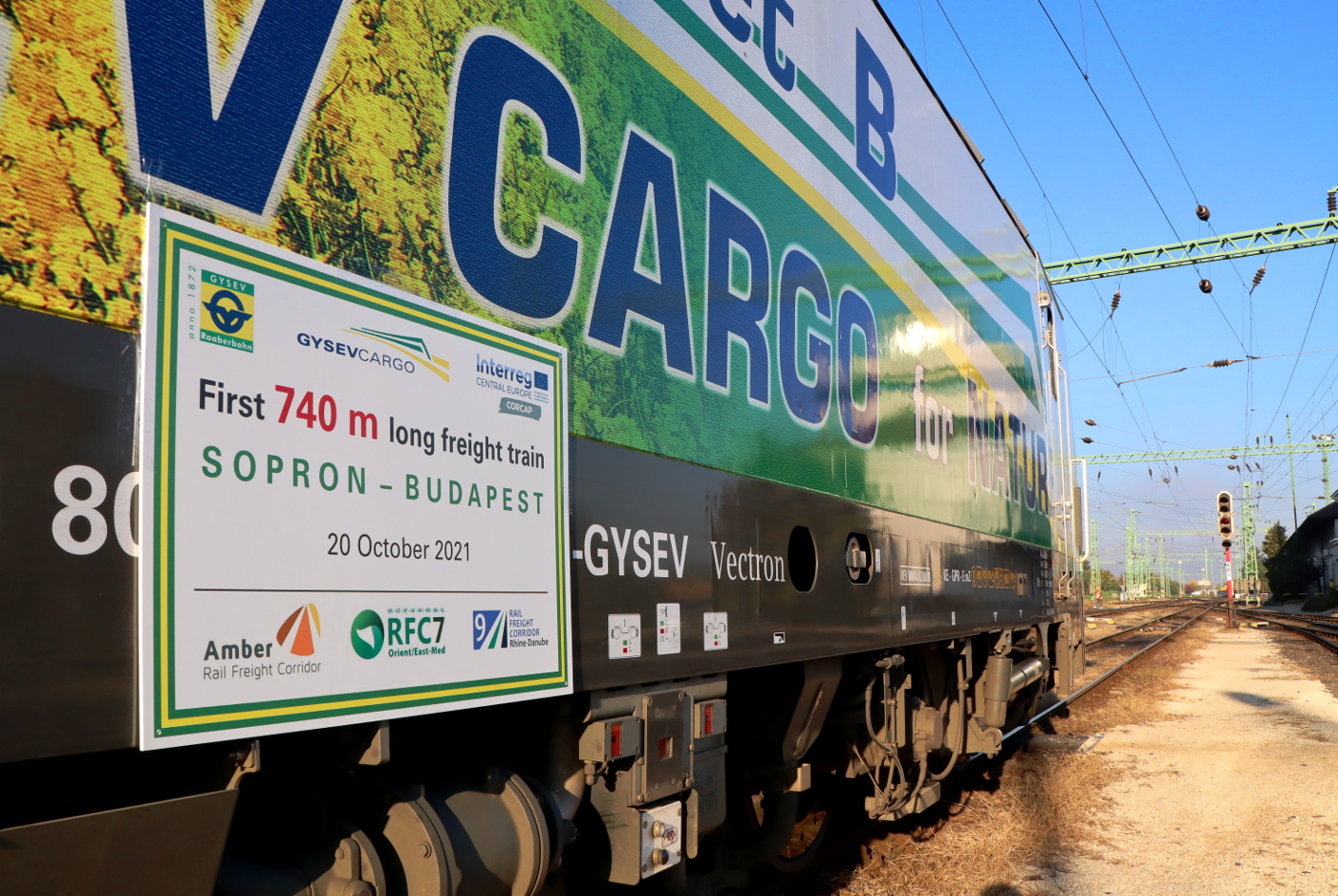 On 20 October 2021 freight train operator GYSEV CARGO operated the first 740 m long Demo-Train on the Sopron – Budapest section of the AMBER Rail Freight Corridor in the framework of the international CORCAP-project. Stakeholders of the corridor, including Representatives of the European Commission, the Hungarian Ministry for Innovation and Technology and from cooperating Rail Freight Corridors and project partners were able to accompany the train in two passenger coaches attached to it.

The TEN-T Demo-Train was organized jointly by GYSEV and GYSEV Cargo in connection with an International Rail Freight Workshop taking place on the day before in Sopron. Both events form part of the Interreg-project CORCAP - Capitalising TEN-T corridors for regional development and logistics.

At the workshop TEN-T Coordinator Prof. Péter Balázs from the European Commission (DG MOVE) outlined the objectives of the currently on-going revision of the policy framework for the Trans-European Networks for Transport. He emphasized in his keynote speech the need for the rail freight sector to better adapt to market demands and customer expectations, emphasizing in particular the need for timely deployment of the TEN-T minimum infrastructure standards, which include the requirement to allow the operation of 740 m long freight trains on the Core Network by 2030. He also highlighted the indispensable role of rail freight for being able to meet the ambitious targets of the European Green Deal, with the objective of reducing CO2-emissions by 55% until 2030 and reaching carbon neutrality by 2050.

Mrs. Szilvia Mogyorósi, Head of Department at the Hungarian Ministry for Innovation and Technology, highlighted in her welcome address the strong engagement of Hungary in the EU Rail Freight Corridors and mentioned various important investments into the railway infrastructure in Hungary in order to eliminate bottlenecks, increase capacity and allow more efficient rail freight operations. She also underlined that a future V4-high-speed line in Hungary can help to free up capacity for freight on the conventional network, allowing the rail system to accommodate expected growth in both passenger and freight traffic.

Mr. Szilárd Kövesdi, CEO of GYSEV, noted in his welcome speech the fact that GYSEV, after having hosted the Connecting Europe Express just a month earlier, now engaged again with the CORCAP-workshop and TEN-T Demo Train an important international railway event, proving the strategic value, which GYSEV attributes to the development of European rail freight and Rail Freight Corridors.

Mr. János Boda, CEO of GYSEV CARGO, emphasized in his welcome speech the importance of taking measures to increase the competitiveness of rail freight, which must include as key elements the realization of economies of scale – in particular through longer trains – and the full exploitation of the potential of digitalisation and automation in rail freight, two fields in which GYSEV CARGO strongly engages in.

Dr. Ludwig Scharmann from the Saxon Ministry for Regional Development in Germany – the lead partner in the project - gave the audience a comprehensive introduction to the CORCAP project, presenting the different Pilot Actions carried out by the Project Partners. He also stressed the importance of better integration of transport planning and spatial planning and the contribution of the CORCAP-project to bringing together experts, stakeholders and decision-makers from these fields.

Further speakers giving valuable insights into different aspects addressed by the project and presenting views of its stakeholders were Mrs. Mosóczi, Head of International Relations at GYSEV, Member of the Management Board of RFC OEM and Chair of the Management Board of RFC AMBER, Mr. Balogh, C-OSS-Manager of RFC OEM, Mr. Kontor, Sales Expert at GYSEV CARGO, Mr. András Nyíri, Director of Operations at Rail Cargo Hungaria and Spokesperson of the RFC AMBER Railway and Terminal Advisory Groups, Mr. Saske from the EGTC Dresden – Prague, Mr. Macák, Planner at the Institute for Spatial Planning in Slovakia, and Mr. Nestler, Executive Director at the company LUB-Consulting.

Dr. Troche, Managing Director of RFC AMBER and Senior Advisor for International Projects at GYSEV, moderated the event and also gave an overview over potential small-scale low-cost measures aimed at improving the conditions for rail freight in the Hungarian and adjacent sections of the corridor and improving the interconnectivity with other corridors.

A Roundtable with all speakers, addressing questions from the audience, concluded the workshop, which gathered participants from seven countries and five EU Rail Freight Corridors, besides RFCs AMBER, Orient/East-Med and Rhine-Danube, which pass the region, also from RFC  Alpine-Western Balkan and RFC Scandinavian-Mediterranean, proving the close exchange and cooperation taking place between different corridors.

The TEN-T Demo-Train was the first 740 m long freight train on the 216 km long Sopron - Budapest line, promoting the TEN-T target standard for freight lines of the TEN-T network. The line Sopron - Budapest belongs to Rail Freight Corridors RFC AMBER, RFC Orient/East-Med and RFC Rhine-Danube, reflecting its importance for international rail transport. The train departed from the Sopron marshalling yard, where participants before departure made a visit to the yard control tower and the adjacent intermodal terminal. On board the train a light lunch was served in the two passenger coaches attached to it. A Networking Dinner in Budapest, organized by the German and Hungarian partners in the project allowed all participants to conclude the second day in a pleasant atmosphere.

The experiences gathered from the TEN-T Demo-Train will feed into further analyses by the parties concerned. The aim is to provide better conditions for more efficient and competitive rail freight on key routes for freight, with a particular focus on enabling the operation of longer trains.

Please find further photos of the TEN-T Demo-Train in our Photo Gallery.

are now published and accessible in the Path Coordination System (PCS),

the unique booking tools for PaPs, and ready for you to order via the following link:

For any questions and support, do not hesitate to contact the C-OSS.