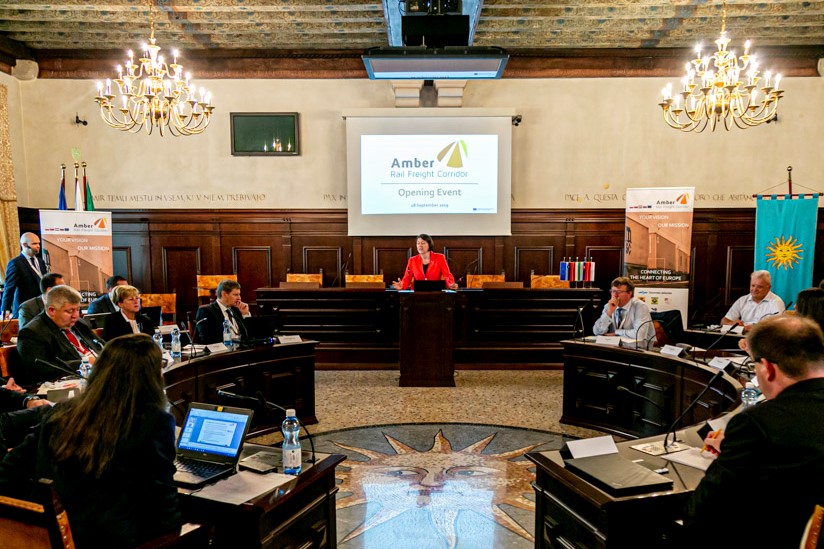 On 18 September 2019 the Amber Rail Freight Corridor held its grand Opening Event in the prestigious Praetorian Palace in the Slovenian seaport of Koper. EU Transport Commissioner Violeta Bulc, who gave an inspiring welcome address to the participants, congratulated the Amber Rail Freight Corridor to this historic milestone and emphasized the importance of the corridor for the development of international rail freight in Central-Eastern Europe.

Commissioner Bulc highlighted the important role of EU Rail Freight Corridors as an integral part in the European policy for the Trans-European Networks for Transport (TEN-T). She also underlined the contribution of rail freight to achieve key objectives of the EU White Paper on Transport and encouraged the Amber Rail Freight Corridor to continue working closely together with customers as well as with terminals to ensure a good interconnection with other transport modes. She also announced that rail would continue to be in the focus of TEN-T funding even in the up-coming 2021-2027 EU Multiannual Financial Framework.

Another speaker from the European Commission, Keir Fitch, Head of the unit for rail interoperability at DG MOVE, stressed the need to make rail more attractive and competitive on the transport market, emphasizing that the Amber Rail Freight Corridor, together with the other EU Rail Freight Corridors, must form a European-wide network for competitive rail freight. Combined with a full implementation of the 4th Railway Package the objective is to achieve a truly Single European Rail Area, which would help rail to deliver an even stronger contribution to the de-carbonization of the European transport system. He also emphasized the need to exploit the full potential of digitalization and automation in rail transport, drawing the attention to the EU-wide research and development initiative Shift2Rail, which is now staring to deliver tangible outcomes.

From the side of the Ministries the State Secretaries for Transport of Slovenia, Nina Mauhler, and of Hungary, László Mosóczi, welcomed in their speeches the opening of the corridor. They reiterated the strong commitment, which the countries have to the Amber Rail Freight Corridor, underlining that it was the first of the EU Rail Freight Corridors established on the joint initiative of Member States. The Ministerial session of the Opening Event concluded with the Ministries’ Representatives of all four countries signing an agreement handing over the chair of the Executive Board of the corridor from Hungary to Slovenia.

Welcome addresses to the participants of the Opening Event were also given by Matjaž Kranjc, Director of the Slovenian Railway Infrastructure SŽ-I, and host of the event, and Dimitrij Zadel, President of the Management Board of the Port of Koper.

Andrea Mosóczi, Chairperson of the Management Board of the Amber Rail Freight Corridor, recapitulated the numerous steps, which were taken by the corridor Members – five Railway Infrastructure Managers and one Allocation Body – to make the Amber Rail Freight Corridor operational. She also thanked the Commission for the support from the Connecting Europe Facility and presented to the audience the promotional movie, which had its premiere on the Opening Event (the video can be watched on the website of the corridor).

Mr András Nyíri, Spokesperson of the Railway and Terminal Advisory Groups (RAG/TAG) of the Amber Rail Freight Corridor, congratulated the corridor to its opening and presented in his speech expectations of the corridor customers on the future development of the corridor. He underlined the value, which Rail Freight Corridors provide to customers by creating a permanent international platform to discuss issues in cross-border rail freight and to elaborate new and better solutions. He also welcomed the adoption of an Action Plan by the RFC Amber Management Board on the previous day, aiming at investigating a number of both short- and long-term measures to improve the corridor; this Action Plan had been elaborated jointly with the RAG/TAG.

Speakers from Metrans Slovakia, the Port of Koper, the Freeport of Budapest, PKP Cargo and DB Cargo Europe demonstrated the multitude of stakeholders, customers and partners of the Amber Rail Freight Corridor; in their presentations they gave many insights into aspects which will be of importance for the development of the corridor in the future.

In the afternoon, a High-Level Corridor Roundtable with the corridor Members represented by Juraj Tkáč, CEO of ŽSR from Slovakia, Szilárd Kövesdi, CEO of GYSEV from Hungary, Franc Klobučar, Assistant Director of SŽ-I from Slovenia, Piroska Sárvári, Director-General for Operations of MÁV from Hungary, László Pósalaki, Head of Capacity Allocation of VPE from Hungary and Jarosław Majchrzak, Deputy Director of Development of PLK from Poland, responded to various questions concerning their view about the corridor. They highlighted the achievements, which had been made, the mutual benefits stemming from the close exchange with the customers, and presented on-going, planned or recently finalized infrastructure improvements of RFC Amber corridor lines, which help rail freight to become faster and more efficient. They also raised ideas how to improve the corridor further through smoother processes and market-oriented products and jointly expressed their commitment to continue the already close cooperation in the framework of the Amber RFC.

The Opening Event finished with a site visit to the Port of Koper, allowing interesting insights into a port, which is an important origin and destination of freight trains using the Amber Rail Freight Corridor and which shows a remarkably high share for rail in its hinterland traffic.